After a wonderful but hectic Thanksgiving, Mary Lee and I spent a weekend on retreat at the Episcopal monastery of Society of Saint John the Evangelist in Cambridge, Massachusetts, a place we’ve been coming to for twenty-five years in search of silence and slow time. On Saturday afternoon, because the sun sets in this part of the world around 4:00 p.m., I decided to catch the last daylight and take a walk before Evening Prayer.

As I left the monastery, the sun was buttering tiers of purple clouds over the Boston skyline. I jay-walked across Memorial Drive, turned right, and joined the joggers, walkers, and cyclists on the path along the Charles River—a mix of races I don’t see in Maine, some talking into microphones and headsets, others conversing with one another, possibly in Chinese.

After about a quarter of a mile, I passed the Riverside Boat Club. I turned left to cross the Eliot Bridge, pulling up the collar of my coat against a raw wind coming down the river. The late afternoon sun and clouds reflected in the rippling waters of the Charles, the lengthening shadows of the sycamores, and the dank, November wind all churned up memories of another wind coming down another river thirty years earlier. I saw myself walking back from the Eastern Maine Medical Center to the Ronald McDonald House after spending the day watching my eighteen-year-old daughter die a little more from the cancer ravaging her body. I recalled the Christmas tree sellers in their vans and pick-up trucks in Cascade Park at the bottom of the hill across from the Penobscot River and how Christmas seemed at the time like some horrible joke played on the human race by a sadistic god promising peace on earth, good will to all, and then inflicting more war, poverty, disease, and death on us suffering buggers.

Now, however, I realized as I turned left after the bridge and started walking along Storrow Drive, that although I could still vividly picture details from my walk back from the hospital—the seagulls circling over the river, the mansard roofs on the houses—I could no longer feel the anger, confusion, and shame that once consumed me. Thanks to prayer and meditation and spiritual direction—much of which happened at the SSJE monastery—I’ve had joy as well as pain since Laurie’s death. Last summer I had heart surgery which has given me renewed hope that I may be around to watch my grandchildren grow up.

The sun dropped, gilding the tops of buildings on my right. The clouds became red and gray. Just outside a patch of skim ice near the shore of the river, a dozen geese floated tranquilly, while on the other side of me, rush hour traffic hurdled by. Horns honked.

The geese reminded me of my father-in-law, George, who used to urge his employees to work like ducks on the water: calm and serene on the surface, paddling like hell underneath. He was the one who introduced me to this walk around the Charles; he made it almost every day. One of the most gracious men I’ve ever known, he and his wife Elaine retired to Cambridge to an apartment just three doors down from the monastery, which made it that much easier for Mary Lee and me to become part of the SSJE community.

Hearing the whooshing traffic, I recalled that George used to carry a plastic bag with him when he walked here, collecting what he called “street glass,” bits of broken head and tail lights from the innumerable accidents caused by Massachusetts drivers along Memorial and Storrow Drives. By the time Elaine died and George left 985 Memorial Drive for a retirement community in Lexington, he’d collected enough colored glass and plastic to fill I don’t know how many glass jars, which reposed on bookcases and windowsills all over the apartment.

Looking across the river back at Memorial Drive, I imagined Elaine, standing in front of her window, holding her glass of gin, watching the sunset behind me before heading back to the kitchen to finish preparing another of her gourmet dinners. She used to rate sunsets; I thought she might give this one a “7” or an “8.” So I made it a “7.5.”

When she died, her service was held in the monastery, and I remembered the Brothers’ chanting, and the reception back at the apartment, monks mingling with the family of academics, doctors, and journalists I married into. When George remarried, four years later, it was in the monastery, as was his funeral ten years after that.

Crossing the Weeks Foot Bridge in front of Harvard’s Leverett and Dunster Houses, I realized what an important part the monastery and the Brothers have played in my life for the last twenty-five years. I walked back Memorial Drive, past Winthrop and Eliot Houses, through John F. Kennedy Park, recalling my spiritual directors who guided me along the rocky road of grief—showed me that I couldn’t keep thinking of Laurie as some photograph in an old album, that if I actually believed in this thing called resurrection,  I needed to father an ongoing relationship with her, think of her as being somehow present, here and now.  And indeed, the first time after her death when I felt her touch was as I sat at a desk in one of the guest rooms of the monastery.

I thought about how my retreats and pilgrimages intertwine, like the design on the Celtic cross tattooed on my forearm. Yes, I go to the monastery on retreat to withdraw from what Jesus and St. Paul call “the world,” but I’m also making a pilgrimage to answer a call, draw near the sacred, find a source of healing, and pay homage to those I think of as the saints in my life: Laurie, George, Elaine, the Brothers who have died, like Brother Eldridge, who helped me see that like the Father in the Parable of the Prodigal Son, I can wait in continual hope for my child, sending out my love in the confidence that she’ll receive it, or Brother John, my first spiritual director, who told me, “No, I can’t help you cut down on your drinking, but if you decide you want to quit, I’ll do everything I can to help you.” Or those Brothers who continue to buoy me, like Brother Curtis, the first monk I ever talked to here, and Brother James, whom I’ve watched lose hair, put on thirty pounds, and become Brother Superior at SSJE.

By the time I opened the gate and entered the monastery courtyard, the sun had disappeared; inky layers of clouds, however, were still striated with gold. Streetlights glowed and lambent windows in the apartments along Memorial Drive looked warm and urbane. The illuminated cross in front of the door to the guest house welcomed me home. Although I’d been gone less than an hour and had walked maybe two miles, it felt like a much longer journey. 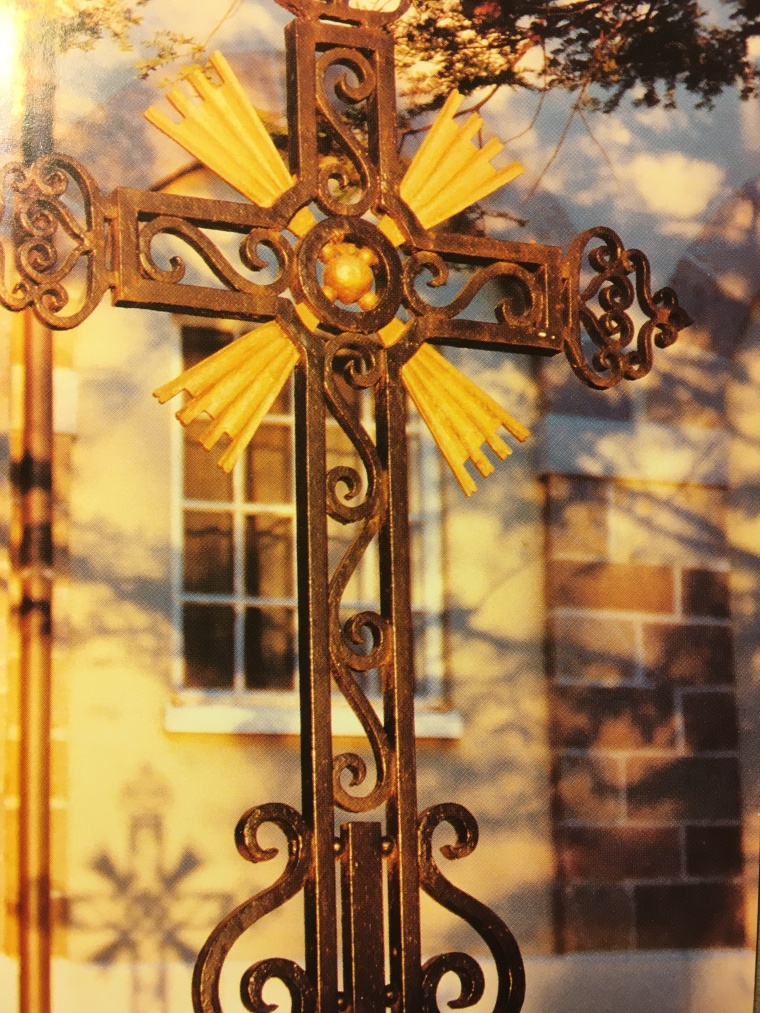 5 thoughts on “Walking at Sunset”

The Geriatric Pilgrim is now a Book!

Every year, two hundred million people make a pilgrimage to religious and spiritual sites around the world. The Geriatric Pilgrim: Tales from the Journey explores how Rick Wile’s pilgrimage experiences have taught him that life itself can be a pilgrimage: both an exterior and interior journey, one involving curiosity, vulnerability, discomfort, an embracing of the unknown, and a recognition that there is, as 12-steppers say, a higher power and that we’re not it. Whether he’s writing about struggling with the sun and souvenir sellers in the Old City of Jerusalem, watching a lion in the Serengeti in Africa, hiking to the Holiday Island of Lindisfarne in England, searching for family roots in Nova Scotia, or navigating memories of growing up in a small Maine town the 1950’s, Rick is also reflecting on his interior journeys to find healing from growing up in an alcoholic family, the death of his eighteen-year-old daughter, and growing old during a worldwide pandemic.

Part travelogue, part rumination on grief and grace, part coming of (old) age memoir, The Geriatric Pilgrim: Tales from the Journey reveals how viewing life as a pilgrimage can bring all of us healing and hope.