“Blessed are the hearts that bend; they shall never be broken.”

I don’t feel 75. Seeing myself in the mirror every day, I’ve learned to ignore the lines and moles and turkey wattle so I can say to my reflection, “You don’t look 75.” But when I see myself in a photograph, bent over, my back as the Psalmist says, “like a warped bow,” I think, “Who the hell is that old fart?”

Still, I’m beginning to wonder if my bent back isn’t trying to teach me something.

Besides the fact that until I lost four inches I always liked being taller than most people, I’ve also always prided myself on not bending—that I strive for goals with single-minded determination (See https://geriatricpilgrim.com/2018/06/26/finish-line/). In high school, I spent a good 360 days a year with a basketball in my hands. While never a star, I did learn to overcome the dysplasia that would later result in bilateral hip replacement and a general lack of coordination enough so that my former 8th-grade basketball coach used me as an example of what hard work can accomplish.

As a high-school English teacher, I worked seven days a week creating lesson plans, correcting essays, organizing my classroom, and going to professional conferences. And when I left teaching to begin writing, I established a strict routine for writing at least five days a week, augmented by summer conferences. I returned to school at the age of 60 to get an MFA, and then continued with more summer conferences. I spent twenty years working on a novel, writing I can’t tell you how many drafts, changing it from a memoir to a novel (available on Amazon or from my website, http://richardwile.com).  Since then, I’ve maintained my writing schedule, publishing this blog without fail every two weeks for the past three years.

But there have been times when persistence and self-discipline haven’t paid off—have actually proved counter-productive. For years after the death of my eighteen-year-old daughter Laurie from cancer, I tried to treat my grief as another athletic opponent to be overcome by the will power that had served me so well in the past. I disdained my tears and shoved my anger down, refusing to bend in what I saw as submission to grief.

But the more I tried to bury my anger, the more it resurfaced as guilt, shame, and resentment. Recently, I learned that one definition of insanity is doing the same thing over and over again and expecting different results. That was me—shutting everyone out as I obsessed with somehow “winning the battle” with grief—and if I didn’t become insane, I certainly became irrational. Not until I surrendered my shame and my guilt and my anger—in other words, my ego— to what I now call the God-of-my-not-Understanding (See “https://geriatricpilgrim.com/2016/03/07/dont-ask-why-just-ask-for-help/), was I able not only to survive Laurie’s death, but to discover joy and love and, most of all, Grace.

The more I think about it, the more I question how well my rigid single-mindedness has actually served me. In going to reunions, talking with old classmates, I can see that those years I spent playing basketball kept my circle of friends small, kept me from knowing some really neat people. I see how the game burned me out, so that I never wanted to play basketball again (and seldom watch the sport anymore). And I see that one of the reasons I was so miserable in college was that I had no idea what to do with myself without the game. (Bridge and pool were poor substitutes.)

One of the major sources of my guilt after Laurie died was thinking of all those weekends I corrected papers and went to school to put up new bulletin boards when I could have been with my child, and I still regret not spending more time with her. Now I’m asking myself whether as Mary Lee and I grow older and our grandchildren grow up, I’ll regret having spent more time focused on the computer keyboard than on them.

I’m also wondering if I’ve been too hung up for too long on the idea that to bend means only to yield or to submit. Bend also means change, growth, bending towards something—such as the way plants bend toward sunlight—or someone—such as how I bend for my grandchildren or toward the alter at church. 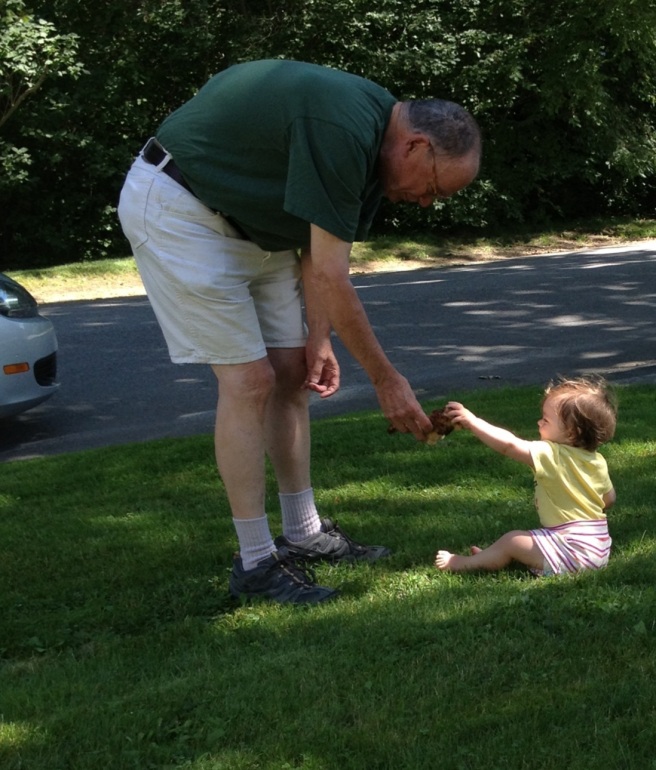 And I’m thinking I need to be more intentive about bending, being less rigid, growing instead of remaining inert.

I’m going to start with this blog. I’ve enjoyed the last three years of publishing it every two weeks, but I’m also feeling pressure to continue even when I’ve nothing to say. And as I’ve been writing today’s blog, more and more things have cropped up—an upcoming pilgrimage to Africa, work on an editing position I hold, trying to put some legal stuff in order—which has made making my self-imposed deadline difficult. I think of how I burned out on the basketball court, and I don’t want that to happen.

So I’m going to take a sabbatical. Prepare for Africa, let the experience teach me what it has to teach without worrying, “Can I get a blog out of this?” and then take some time to process not only the journey to Tanzania, but also my journey toward my eighties. I hope to work on some longer writing projects that have been kicking around in the musty, dusty corners of my mind.

But I’m also planning to resume this blog. I started it just after I’d published my novel, when I wanted to write something more immediate, more spontaneous. And it’s been a great help in getting me to see not only where I’ve been but where I’m going. It’s been part of my twelve-step work, which I’m nowhere near done with.  Through this blog, I’ve rekindled old friendships and made a number of new ones with people from all over the world.

But I feel I need to bend the topography a bit, “bend” both in the sense of yielding and in the sense of turning in a different direction, writing only when I have something to say, not because I have to say something,

Until then, to return to the Psalmist’s words, “peace be within your walls and quietness within your towers.”

10 thoughts on “Learning to Bend”