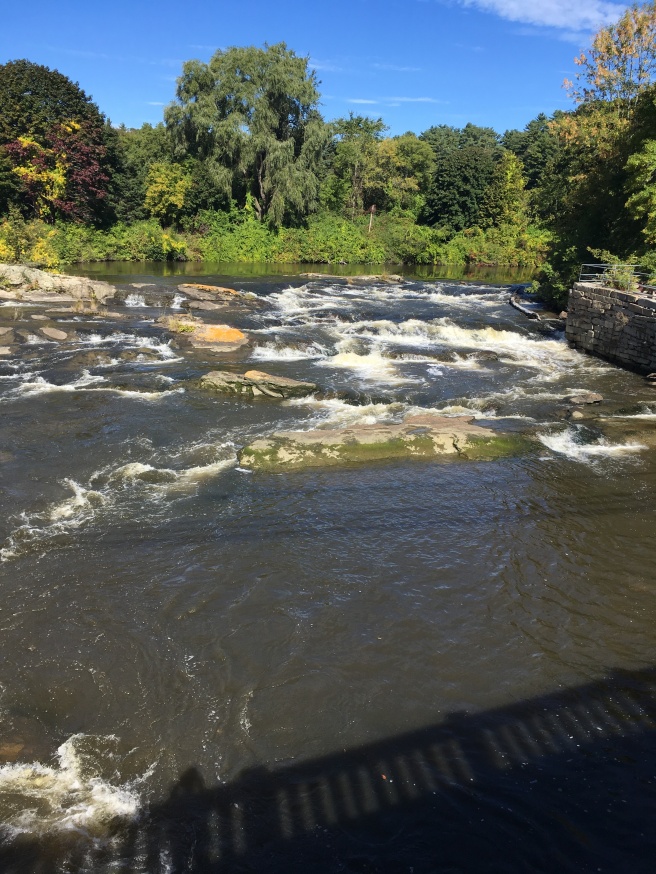 “Time is the substance from which I am made. Time is a river which carries me along, but I am the river…”— Jorge Luis Borges

Pulled by currents you don’t understand, you swing off the interstate at the exit to the small New England town in which you grew up, park the car on Main Street, and walk down the hill to where the river meets the harbor. On this crisp autumn afternoon, you stop on the bridge, both of you granulated with age, and gaze upstream, feeling the memories wash over you.

As the river rounds the bend from just below where you used to live, the waters are placid and brown. You remember swimming in those brown waters, despite the threat of your mother’s hairbrush, dogpaddling through chicken parts, dead fish, and raw sewage that drifted down from the upper falls, which from a distance was this white rush of water gamboling over great gray rocks, and you wonder if that’s why you go to church despite friends’ disdain and theological questions that bob like chicken guts—if you aren’t paddling along, trying to stay afloat, praying to catch a glimpse of Grace flowing from the chalice.

At the bend, a granite rock juts out from a bank. It reminds you of the rock further upstream on which you used to sit, watching water flow by, imagining the river taking you to far-off countries filled with adventure and romance. You still like to travel, still find traveling rejuvenates you, educates you, makes you a little less rigid.

Just before the foundation of an old sawmill, the river picks up speed, and rushes toward you, sunlit white water over mossy rocks. It’s 1959, and you’re standing on this bridge, watching the water, inhaling the smell of burning leaves—smoky fragrance of passion. She stands beside you. Sun splashes her pixie-cut. Cats-eye glasses sparkle. A smile of dimples and braces. You take her hand. Hear her laughter flow with the gushing river.

Now you stand alone on the bridge and look down to where the river slows and runs over old foundations crumbling under murky waters. You think of the good-bye letter she sent you in college … sight of her in waitress-whites grinding a cigarette into the pavement as she stepped from a car … gossip of affairs with teachers, abortion … recent rumors of dementia … Facebook picture of white-gold hair, moles, wrinkles, and the flabby ears you all have these days. You think of your own crumbling walls: divorce, a daughter’s death, defeats, surgeries, addictions, rejections …

Checking for traffic (something you never had to do in 1959), you cross the bridge to watch the water run under the interstate overpass, then empty into the harbor still filled with sailboats, cabin cruisers, and lobster boats. For the last ten years of his life, your father had a boat there, and you recall the Labor Day weekend he offered to take you fishing. That was the weekend the resentments that had smoldered for years at the roots of your first marriage ignited and you packed your clothes into the older of your two cars and drove to spend the holiday with your parents before looking for a place to live.

Despite bitching about what he thought was a stomachache (the cancer wouldn’t be diagnosed for a couple of months), you both walked along the docks to a slip at the far end, where his sixteen-foot outboard sat like an afterthought amid all the other pleasure crafts. Even a hundred pounds overweight, your father still moved with the easy grace of the athlete he was as he unbuttoned the canvas top of the boat and untied the mooring ropes. As you puttered down the river, you sat in the stern and watched him at the wheel, seeing him perhaps for the first time, not as a hero or an effigy to be burned, but as a man who always did the best he could with the tools he had.

Rounding another bend, you headed out into Casco Bay. Your father asked you to get him a Blue Ribbon and to take one for yourself. You trolled a little for mackerel. You don’t remember if you caught any fish. You don’t recall what you talked about, only that it felt good to be with your dad as he piloted you past the rocks and through the shoals and the seaweed and the occasional dead fish floating belly-up.

Filled with regret for not spending more time with your father and gratitude for having had that day, you stand on the bridge and look through the overpass at the river. Watch it leave the harbor and disappear around a bend under a steep bank of maple and birch trees. At the top of that bank is the cemetery where stones honoring your father, mother, and daughter lie under gnarled maple trees. You feel the river pulling you, imagine yourself being taken downstream to the cemetery and beyond, into a vast, unknown ocean that awaits us all.

But not yet. The same mysterious currents that brought you here today now pull you in another direction. You lift your eyes to the interstate calling you to family and friends and places you have yet to see and people you have yet to meet. The river will bring you here again, but for now it’s time to turn and walk back up the hill to the car. 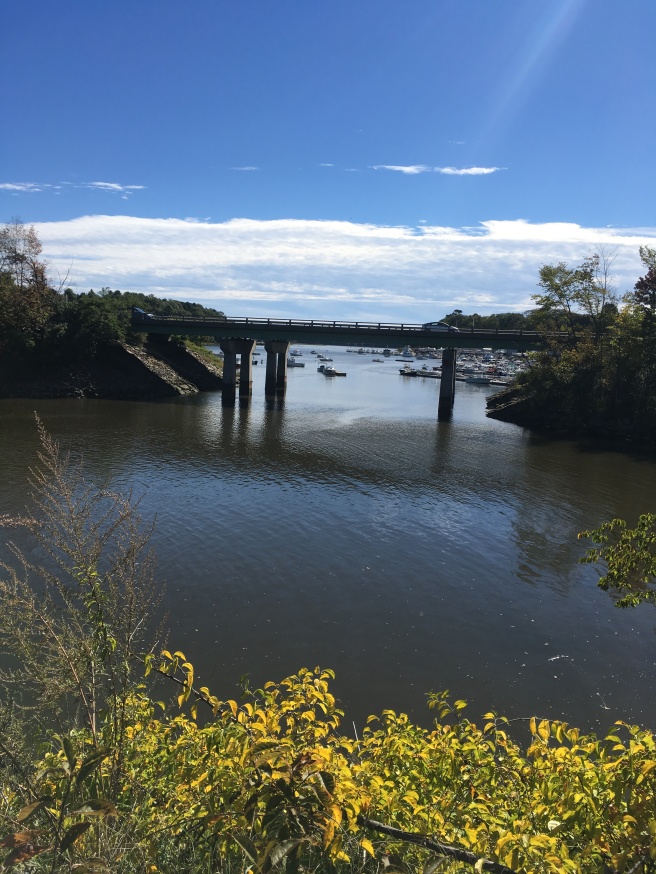 4 thoughts on “The River”