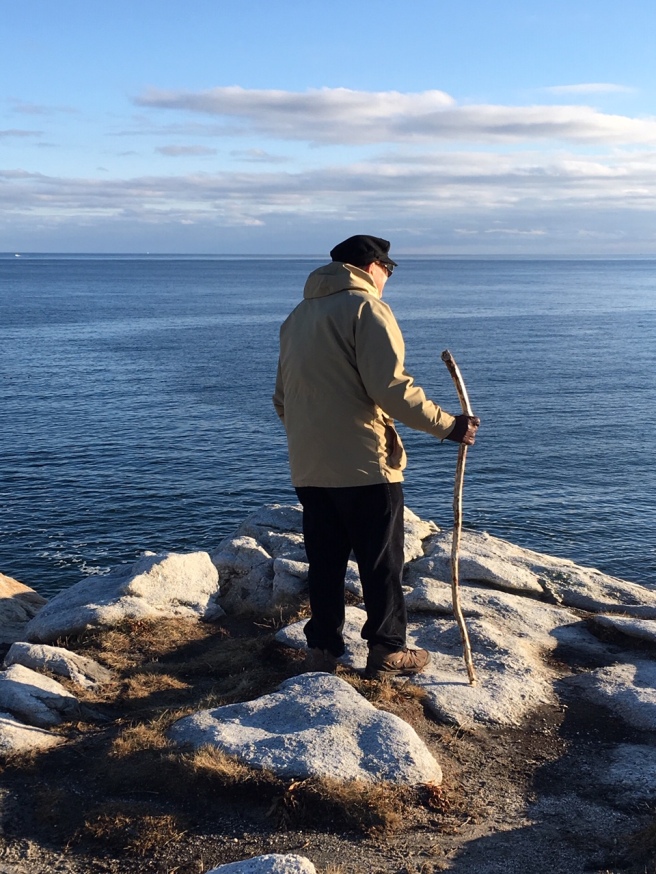 I spent months living in dread of turning 70, because then I would be officially “old”—over the hill, past my prime, debilitated, enfeebled, ad infinitum. Well, four months shy of turning 76, I can honestly say being 70 isn’t bad, not bad at all.

Now, I’ve been lucky. No chronic disease to live with, no financial burdens. Mary Lee is well, and her sons and their wives have no major problems other than the common difficulties in raising a family and holding a job these days. The grandchildren are (usually) a delight.

My 70s, of course, have brought about physical changes that are pretty depressing. It seems as if every shower I find a new mole or lipoma to worry about. The hair in my ears grows faster than the hair on my head. My waist is expanding. I’m longer in the tooth and shorter in the leg. (For years I taught T.S. Eliot’s “Love Song of J. Alfred Prufrock” and never understood the line, “I shall wear the bottoms of my trousers rolled.”) I can recall the lyrics to almost every popular song from 1957-65, but I can’t remember the names of the two women who’ve lived across the street for five years. I spend a half-hour a day hunting for something.

Over the last five years, I’ve become more aware of Newton’s Law of Inertia: an object at rest stays at rest and an object in motion stays in motion. It takes me twenty minutes of exercise when I get up in the morning for me to be able to move without hurting. Probably because of the exercise, however, my chronic back pain is less than it has been in years. Beginning a new piece of writing is like hiking through mudflats in hip boots, yet the ensuing drafts are more fun than they used to be. I like to walk, but now the first ten minutes or so, my lungs burn and I have trouble getting enough breath. Then, they clear out and I’m good to go, which often means walking too far because I don’t feel like stopping (it’s not like I have a job or anything to get to). Consequently, I’m stiffer and sorer when I get up the next day to do those exercises.

A bigger problem is that I don’t seem to be able to stop talking after I’ve run out of things to say. My father-in-law used to speak of being in his “anecdotage.” I understand. I have all these great stories that I know you’re just dying to hear, stories that will amuse, educate, and inspire you. So why are your eyes glazing over?

My tastes have changed. I eat less meat than I used to and more chocolate. I’ve grown fond of oatmeal, kale, and certain kinds of seaweed, and less interested in lettuce, potatoes—especially fries—and baked beans. Not always, but usually—and I’m still having trouble believing this—I’d rather have salmon than lobster, tuna steak than fried clams.

Two years ago, when we bought a car with satellite radio, I couldn’t wait to find the 50’s and 60’s music channels. That lasted about a month (If, for my sins, I go to Hell, “Itsy Bitsy Yellow Polka Dot Bikini” will play nonstop.) I tried “Elvis Radio” for about four hours, and “The Beatles Channel” for maybe two. I listened to a blue-grass station for a while, and then several country and western ones. Now, I’m almost always listening to a jazz or classical station. It’s not that I’ve necessarily grown more sophisticated—I play a banjo for heaven’s sake—the music just seems fresher and more varied.

Ever since my family bought its first television in 1953, I’ve watched televised sports, but now I can’t watch anything on the tube except for a championship game featuring some New England team. I’ve had it with the incessant number of commercials advertising products I don’t understand at a volume twice as loud as the programing. It was bad enough when sports became huge businesses, but now they’ve become politicized as well. I’m sorry, I watch sports to forget about what’s happening to this country. I’ll sit in the stands at a local college or high school game, if you don’t mind.

Something else I never expected: I’m learning to accept, even value, my increasing powerlessness. I’m not talking now only of my physical condition. Five years ago, I entered a 12-step program. Step One states, “We admitted we were powerless over alcohol and that our lives had become unmanageable.” Everyone I’ve ever talked to in the program says that this is the hardest step of all. Admitting powerlessness runs counter to everything I, and I think most Americans grew up learning.

Like most of you, I expect, I was raised to be self-sufficient—“master of my fate… captain of my soul,” to quote one of my high school reading assignments . As an adult, I loved hear Frank Sinatra or Elvis sing,

For what is a man, what has he got?

If not himself, then he has naught

To say the things he truly feels

and not the words of one who kneels.

The record shows I took the blows

and did it my way.

But when I began reading about adult children of alcoholics, I learned how many of us were raised to be masters of not only our own fate but also the fate of the rest of our families. For example, I somehow always knew as a child that I was responsible for making sure that Christmas was a happy time of year, especially for my parents, neither of whom growing up had had happy holidays. I took that sense of responsibility for making others happy with me when I left home and started my own families, so that for seventy years, my Christmases were never as merry as I thought they should be, and it was my fault.

This burden of responsibility became even more oppressive after my daughter died on December 23, 1988. All parents feel guilt when their child dies, but my background as a child of alcoholism magnified it. I’ve written in these blogs several times about feeling my body chemistry change after Thanksgiving and the weight of the next weeks grow heavier and heavier.

Perhaps because of my physical diminishments, however, I’m finding that I have no choice but realize my increasing powerlessness in all facets of life. As my mother said to me when she was about the age I am now, “I used to think life was a case of mind over matter; now I find that what I mind doesn’t matter.”

Yet when I’ve been able to admit my powerlessness, I’ve experienced a wonderful sense of freedom. I can say “no” to causes and activities in which I used to feel I ought to participate, but that I had neither the skills nor the real interest in doing. The last few Thanksgivings, hosting twenty people all younger than I, I finally started putting some of them to work.

And this November I asked myself if my body chemistry was about to change, or was I just opening the same dog-eared horror story of how my daughter died. Laurie loved Christmas. She certainly never wanted me moping about or yelling at motorists on the highway. What would happen, I wondered, if I closed this book and took each day for what it was (or wasn’t).

After the holidays, I’m now trying to view the rest of the year not as something to master, but as something to accept. I’ve got a long way to go. You don’t unlearn something you’ve been doing for 70 years in five years. But when I can let go of this idea that the world depends upon me to keep it turning, I can see that everything I have—my health, my family— everything I am—including being a grieving parent— is gift.

Yes, I shed some tears on December 23rd. I also had a wonderful holiday season. I hope you did, too.