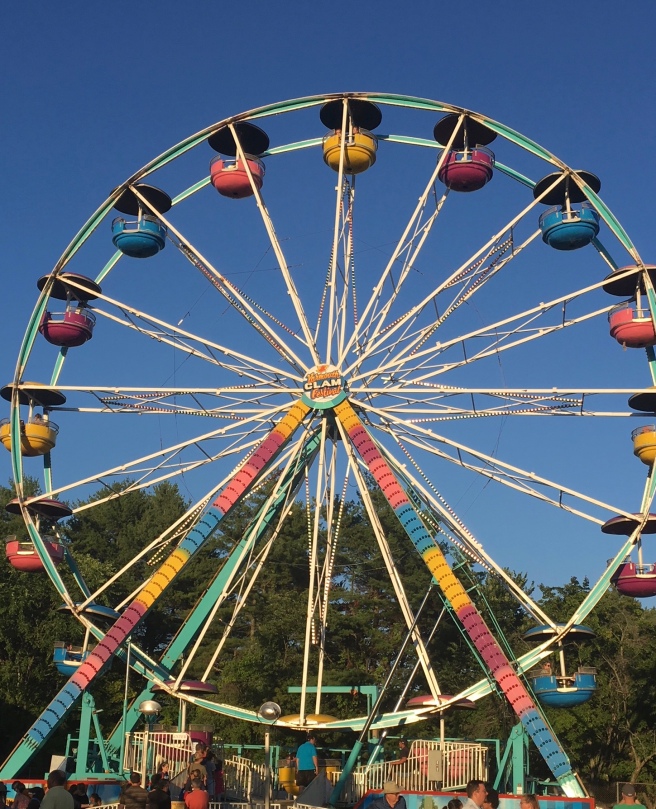 An out-of-key calliope brays and a tinny voice cuts through the night: “Round and round she goes, and where she stops, nobody knows!” Neon lights blaze from the food booths, their greasy smells mingling with those of horse manure and engine oil. The ground under my feet shakes from the vibration of motors turning rides like “The Thriller” and “The Dragon Wagon.” Mary Lee and I tiptoe around a mud puddle, buy a bottle of water, and sit on a bench in front of the Big Eli Wheel, or, as I used the call it when I was growing up, the Ferris Wheel.

Off and on for the past seventy years, I’ve been making a pilgrimage to some version of this carnival. These days, Smokey’s Greater Shows is part of Yarmouth Maine’s Clam Festival, a three-day celebration featuring a parade, artists and artisans, music, games, and clams fixed in just about every possible way. Compared to the downhome atmosphere that surrounds it, the carnival seems likes a drunken rhinestone cowboy who refuses to leave the block party. Still, I’ve always found an energy here absent from the tents up the street selling carved driftwood and Wicked Good Pickles.

In the early 1950’s, when the trucks first rolled through town—red and yellow letters along their sides and pictures of parrots and snakes and tigers or deformed men and mysterious women with almond shaped eyes, I’d stand straddling my bicycle on the sidewalk in front of faded white houses and rust-red stores, trying to get my breath, feeling the noise of the revved engines and ground gears, a hot rush of air tickling my crew cut, stinging my eyes, and pulling me along to the local baseball field where the carnival would set up for another July weekend.

My favorite days were Wednesdays and Thursdays before the carnival actually opened. I loved to watch the heavy-bellied men in brown fedoras setting up the Ferris Wheel, their eyes peering through the smoke of their cigarettes. Some men had mustaches, and some had tattoos of hearts or crosses or eagles—adornments I never saw on my father, or anybody else for that matter, in those Eisenhower days. The summer I was eleven or twelve, a carnie who my father said was “drunker than a skunk” climbed the Ferris wheel in pursuit of someone who’d been taunting him, slipped, and fell to his death. The Portland Press Herald ran a front-page picture of a semicircle of workers, their faces stained by shadows. Which confirmed what I already knew: these men were dangerous; and therefore, cool as hell.

When I was sixteen, the Ferris Wheel became new all over again when I rode it with the girl from Massachusetts I’d met that night: her leg against mine, her head resting against my arm across the back of the bench seat, the two of us alone in the night sky looking down on the world. This is how it will be, I thought, when I’m rich and famous—this feeling of rising out of this hick town and having everyone below gape up in admiration.

Almost sixty years later, I look up at the Big Eli Wheel. Metal and neon lights and florescent seats turn around and around, people ascending and descending, screaming and laughing, I think of how much of my life I’ve spent trying to leave the ordinary behind, rise above the overdeveloped shame and guilt that comes from growing up in an alcoholic family. In college, I loved climbing mountains and the god-like feeling I had when I reached the summits. After my daughter died, and I became interested in theology and spirituality, I discovered the word “transcendence,” a word meaning being in a state above or beyond the ordinary. I took up various forms of meditation, striving for “peak experiences” that would lift me from the pain of her death.

But the problem with thinking of transcendence as being at the top of a carnival ride is that the Ferris Wheel always returns to earth—that the gorgeous chick from Massachusetts says she’s sorry but she’s going steady with some guy back in Worchester. I find myself on a Wheel of Fortune on which my ego rises and falls, depending upon circumstances.

I’ve spent years on this wheel: one moment glorying in clouds of respect, love, and praise, convinced I’m a great teacher, a great writer, a great lover; and the next minute mired in depression, confusion, anger, feeling like an abysmal failure at everything I’ve ever done. Of knowing that God has anointed me with special favor; and then convinced that God is some kind of super sadist, playing with me the way a seven-year-old toys with an ant.

The water bottle is empty, but I’m still contemplating The Big Eli Wheel. It rests on a turquoise, pink, yellow, and purple frame, pastel colored cabs with caps and room for four, like painted mushrooms, rising and falling. Spokes fan out from the center of the wheel.

More and more these days, I’m finding the best way for me to achieve serenity is not to try to rise above feelings like shame and guilt but to go more deeply into them, try to find their core, their center. And I’m wondering if, instead of being at the top of the wheel closer to the heavens, the God of My Not Understanding isn’t really at the center, anchoring me as I spin on Fortune’s wheel between heaven and earth, the spiritual and the profane, success and failure.

I watch two women in their early twenties, I’d guess, with dyed red hair walk by, and from the other direction, two guys with shaved heads and tattoos of screaming eagles, hearts and crosses. One guy says something and both women giggle. Everyone stops. They talk and giggle some more and then walk off together.

Mary Lee takes my hand. We stroll past a teen-aged couple with matching high school jackets, the carnival lights sparkling off their braces as they grin at each another. I see parents buying candy and going on rides with their children. A woman about our age laughs and waves to a little girl who’s probably her granddaughter riding the merry-go-round. A middle-aged couple in jeans comes towards toward us. They’re also holding hands. The man says, “Doctors say holding hands lowers blood pressure by fourteen per cent.” We all laugh.

And I know what’s holding my life together, in spite of all of its ups and downs: the same thing that centers my faith: what I’m looking for even more than transcendence.

Leaving the carnival, I look back at the Big Eli Wheel, circling between the pastel sky and the muddy ground strewn with popcorn and soggy napkins. The spokes radiating out from the center blaze in the setting sunlight.

2 thoughts on “The Carnival Wheel”