Many pilgrimages are made to honor saints or other holy people: pilgrimages to Jerusalem to honor Jesus, to Mecca to honor Mohammed, to Bodh Gaya to honor the Buddha, even to Graceland to honor Elvis or Cooperstown to honor the early baseball greats. Of course, we make these pilgrimages not so much for the dead saints as for ourselves.

Simply put, there is something in most of us that needs to honor the Dead.

I’m writing this on Memorial Day, the day we remember those who have died on the battlefield or, this year, those who’ve died of Covid-19. When I was growing up in a small Maine town during the 1950s, it was a major holiday. Our Memorial Day parade also served as one of my first pilgrimages, as, first in the Cub Scouts and then in the Junior High marching band, I walked from the American Legion Cabin in the center of town, first south, stopping at North Yarmouth Academy to honor the dead graduates, then on to the Catholic and Protestant cemeteries at Riverside, back to the Legion Cabin for a break, and then north to the cemetery by The Old Meeting House on the hill.

At each stop, there were prayers, and, if memory serves me, the playing of Taps. The stones of veterans were decorated with flags and flowers, and I’m guessing out of that tradition grew today’s more general practice of families, regardless of their military background, decorating cemetery plots on Memorial weekend.

I think it’s more than just tradition. When my daughter was dying of cancer, she told her mother and me that she didn’t want to be buried; that she wanted her ashes scattered over the ocean. Her mother couldn’t accept her decision, and after Laurie died, Patricia had a traditional funeral and our daughter’s ashes buried in her family’s cemetery in Downeast Maine. Divorced, shattered by Laurie’s death, I didn’t fight my ex-wife’s decision, just stayed away and had a private service on Sand Beach in Bar Harbor where Mary Lee and I waded into the December waters and scattered some burned mementos of Laurie in the waves.

But after I’d spent several angry years grieving Laurie’s death, a counselor told me that having a specific place to mourn my daughter might help me. For a while, I fought the idea, but one Memorial Day, when I was planting flowers on our family’s plot, I found myself needing Laurie there. For the first time, I sympathized with my first wife’s need to have her daughter with the rest of her family. So, I ordered a memorial stone for Laurie, and, indeed, it was healing. The stone gave me a focus for my grief, gave me, I suppose, a feeling of control over the great mystery of death. I could concretize it, decorate it, tidy it up whenever I felt the need.

Writing today, I realize it’s not merely in cemeteries that I’ve honored the dead who have impacted my life. Looking around my house, I see it full of their presence, and I realize that besides honoring them, I’m keeping them alive.

Of course, photographs are the most common way to keep someone in our lives. Mary Lee and I have pictures of our parents and grandparents in almost every room of the house.  I also have photos of old classmates on the walls of my study and in the spare bedroom where I keep my treadmill. I have paintings which Laurie did on the walls as well as her craft projects on bookcases and end tables. (My favorite is her Fathers’ Day gift to me of eleven small stones painted in different colors, each one with two eyes, standing together in modeling clay on a wooden base, and titled, “Rock Concert.”)

When my father retired from being a carpenter, he kept his hand in by making a number of wooden boxes, chests, candle and cup holders, all of which I have around the house, along with a wooden plate he carved with an intricate leaf pattern in the days before we had television.

I have saved letters and emails from my mother where she talks about her childhood, which, along with a tape recording I made of her reminiscences, helps me remember not only her, but my grandparents and great-grandparents. I have a CD made from a tape of my Grandmother Cleaves, who used to play piano for the silent movies and who once had her own local band, “The Charmers,” performing at a party at the retirement community where she used to live.

I wear on occasion a turtlenecked sweater that used to belong to Dad, as well as two very loud sweaters that my father-on-law used to own, along with his Harvard crimson beret. Speaking of hats, I wear one of my old friend Scott’s Red Sox caps when I watch television. Until the strap broke, I used to wear my father’s swordfish billed cap, but now I have my own. 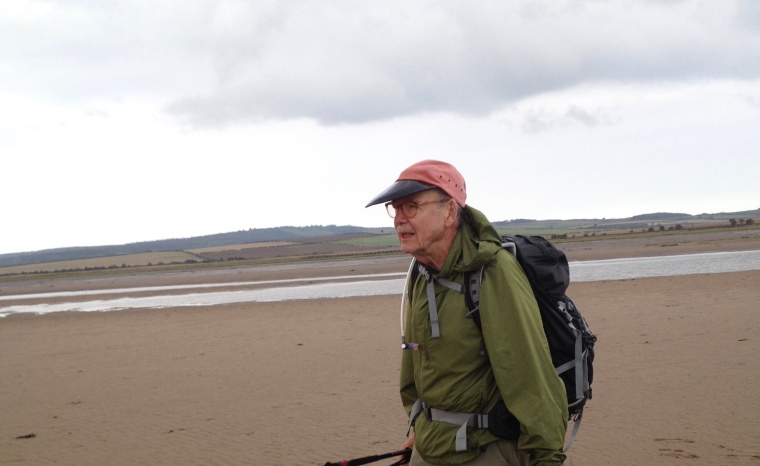 And, although they’re harder and harder to find, I still wear the same kind of forest-green chinos that my Grandfather did. (Oh, and I also have his watch, which doesn’t run but which I can’t throw away.)

For me, these photos and paintings and knickknacks and clothing serve the same purpose as the stones in the cemetery that I’m going to decorate tomorrow (In this time of Corona Crud, I’m waiting until after the Memorial Day rush to avoid the crowds of people): they help me deal with the death that I’m getting closer and closer to, and they are a way to help keep the people I have loved alive.

And I realize all these remembrances are also a way to give thanks for the life I’ve been lucky enough to enjoy: a life filled with blessings I haven’t earned, often coming at just the time I’ve needed to be blessed.

If, as Ann Lamott says, there are only three prayers—“Help,” “Thank You,” and “Wow!”—these are memorials for those to whom I have said those prayers, those who have been the saints in my life, those who have shown me the meaning of the word Grace.

5 thoughts on “In Memoriam”

The Geriatric Pilgrim is now a Book!

Every year, two hundred million people make a pilgrimage to religious and spiritual sites around the world. The Geriatric Pilgrim: Tales from the Journey explores how Rick Wile’s pilgrimage experiences have taught him that life itself can be a pilgrimage: both an exterior and interior journey, one involving curiosity, vulnerability, discomfort, an embracing of the unknown, and a recognition that there is, as 12-steppers say, a higher power and that we’re not it. Whether he’s writing about struggling with the sun and souvenir sellers in the Old City of Jerusalem, watching a lion in the Serengeti in Africa, hiking to the Holiday Island of Lindisfarne in England, searching for family roots in Nova Scotia, or navigating memories of growing up in a small Maine town the 1950’s, Rick is also reflecting on his interior journeys to find healing from growing up in an alcoholic family, the death of his eighteen-year-old daughter, and growing old during a worldwide pandemic.

Part travelogue, part rumination on grief and grace, part coming of (old) age memoir, The Geriatric Pilgrim: Tales from the Journey reveals how viewing life as a pilgrimage can bring all of us healing and hope.