On what would be the last day of Maine’s state parks being open to the public, Mary Lee and I walked down over the rocks to the beach at Reid State Park at the south end of Georgetown Island. It was just past high tide. Waves rose into the air, crested in green and white waves before throwing a blanket of bubbling white foam over the beach and then receding, leaving a skim of white to disappear into the sand just as the next wave frothed in.

We walked to the waterline and headed up the beach, often having to veer away as the water rushed at us. Along this threshold between sea and land, I walked, as I often do these days, on the verge between past and present. Somewhere in an old family album upstairs, I have a picture of me here on this beach. I’m probably seven or eight years old running from a wave that towers over me. In a more recent album, I have a picture of Mary Lee, her two sons, and my daughter, Laurie, jumping in the waves. I remembered that day, throwing myself into the water, feeling myself lifted and carried backwards, experiencing a moment of panic before being dashed against the sand.

Thanks to working a couple of twelve-step programs, they don’t happen as often, but I still have moments of terror when I don’t feel I’m in control, whether it’s being buffeted by waves, keeping my daughter from dying of cancer, or—these days—controlling the spread of coronavirus.

Maybe that’s why I come here. The beach is like an inoculation, in which I’m given a small amount of whatever I need healing from: in this case, the fear of being helpless.

At the end of the beach, waves broke over a rocky point of land, spuming into the air.

A small cove in front of the rocks was strewn with driftwood—some of it eight, ten, even twelve feet long and over a foot in diameter. Logs, in other words, many bleached almost paper-white by sun and sea and salt. Carried in by the power of these waves, they now rested in nests of dried seaweed. Some smaller pieces of wood had been driven into the sand as if thrown by some giant; some lay broken on the beach.

It was hard not to think of bones or bodies, especially in this time of rampant disease. I recalled my grandmother telling me of waiting at the Marlboro Massachusetts railroad station for a train during the flu epidemic of 1918-19. Behind her on the platform, she said, caskets were stacked like chords of wood. (It’s possible that she was pregnant with my father then. Dad was born in August of 1919 and named for his uncle, who’d died of the flu in January of that year.)

Saying a prayer that my grandchildren would not have similar memories, I sat down on a driftwood log, leaned back, and felt the sun on my neck. I picked up a broken stick of driftwood, split, cracked, and deeply lined, jagged at both ends. One of my writing mentors, Barbara Hurd, in her book Walking the Wrack Line, defined a wrack line—that point where the high tide deposits organic matter and other debris—as the boundary between the broken and the whole. That’s a line I’ve not so much walked along as been blown back and forth across, one day feeling whole and healed, the next day feeling wounded and broken.

I ran my hands over the stick. It was satin-smooth, its grain highlighted by the sun. I’m not entirely sure why, but I find beauty in broken things. Maybe because of the different ways things can be broken. For example, the deep cracks, the gnarls, the crags, the ragged ends, the sheen, the colors of driftwood come from its friction with the world through long travel. From its pilgrimage, if you will. Looking over at the driftwood around me, I saw that none of them was the same; they had assumed an individuality they never had when they were growing as part of the dark line of trees I could see on the horizon.

I think the same is true of people. For me, faces get more interesting and more beautiful as they age. And it’s the different ways we are broken that gives us individuality, makes us as Mister Rogers used to say, “special.” Which gives me hope that while we may be broken by—and yes, die from—this disease that is sweeping the world, we as a world will go on and become more beautiful than ever.

But as I looked down the beach, my optimism was swept away by a wave of people rolling towards me. When Mary Lee and I had arrived, the beach was almost deserted. Now, people seemed to be flowing from the parking lot, many of them young, none of them observing any kind of six- foot distancing, laughing, pushing, kicking, or throwing seaweed at one another. Yes, I hope that after this disease passes there will a tidal shift in consciousness, that we will learn to live together, that since the disease is not intimidated by wealth and power, we will see that we’re all in this together and we need to share our resources more equitable, that since so many people are now isolating themselves in order to protect not only their own loved ones but people they don’t know, we will expand our vision of “community” to include the whole world.

But how do I know that coronavirus hasn’t just increased the wealth of the 1% and that when it’s over things will return to normal—that this virus will have no more effect on the way we live in this country than the school shootings have had on our gun control policies? Or worse, that the world will come to resemble those apocalyptic movies like The Road, The Book of Eli, or Mad Max?

As the young people streamed past, I turned away and looked behind me, and saw the number of neat things people had created out of the driftwood. Suspended by old twine from a teepee of driftwood, a faded and pitted lobster buoy gently swayed in the wind. 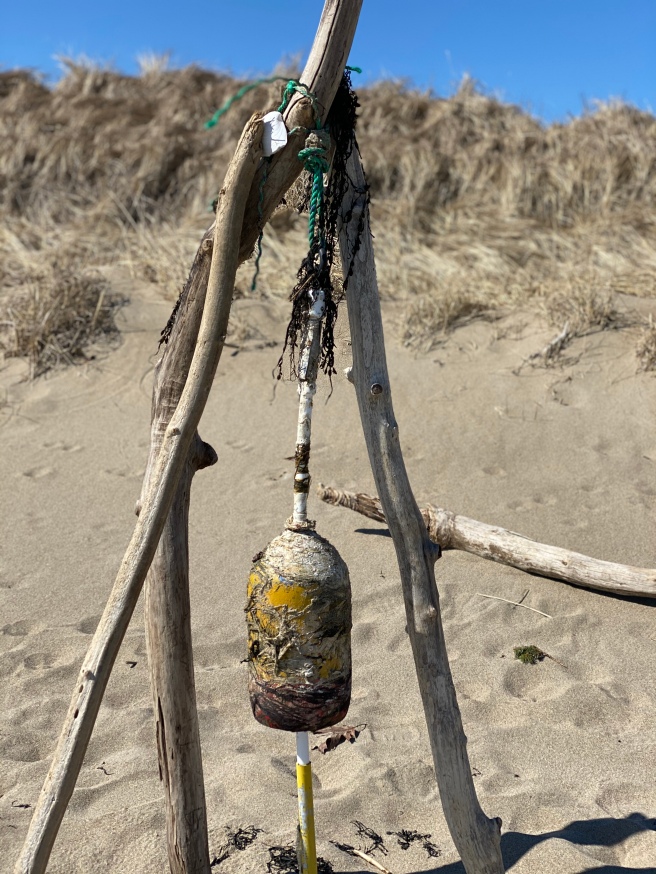 There were several teepees and lean-tos. Someone had made a giant chair. I recalled that at home, I had a walking stick that I’d fashioned a couple of years ago from driftwood from this beach.

A reminder that as long as there are people, people will create. They will build shelters; they will make art. With whatever they have.

I felt better again. I may be helpless against the disease, but I’m not powerless over my response to it.

It was time to leave while I was ahead, while I could believe that no matter what riptides or rocks, waves or storms I run into, no matter how else I am broken, I will eventually be borne into a cove of serenity.

5 thoughts on “Driftwood in the Time of Coronavirus”