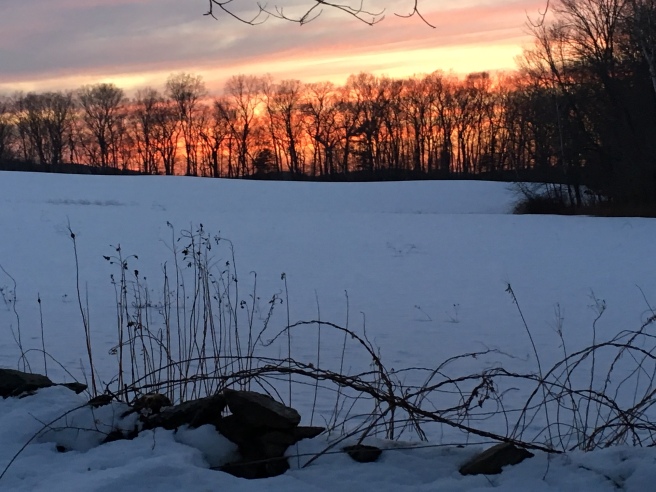 “What does someone do on a retreat, anyway?”

2-16-17: The sun sets, a glowing ball pulsating through the bare birches and maples. A stiff northwest wind whips dervishes of snow across the field between two stone walls. The bare trees form a network of branches across a pink and blue sky.

Someone sat in his hermitage, reading a book on the spirituality of aging and nursing a bad back. Funny how his back often began to act up when he went on retreat. And he’d been relatively pain-free this winter, too.

Occasionally, he wrote in his journal: the view from his window or notes from the book. He jotted down what the author of the book called the “gifts” of aging: a greater capacity to love and be loved. Greater ability to receive and connect with others. A greater sense of freedom.

Well, maybe. Of course, his ability to make love had diminished, the number of people he’d always connected with had shrunk, and his chances to enjoy his freedom were fewer.

He thought about the author’s emphasis on letting go as we age. He’d been practicing letting go in his meditation for over twenty years, and on his Wednesday AlAnon meetings he often sat before the slogan “Let Go, and Let God,” printed in neon-green block letters. Yet he still had trouble, still found himself as he sat in what was supposed to be contemplation, muttering, “Let go… let go… LET GO… LET GO, GODDAMN IT!”

He copied a sentence from the book: We cannot know the great mystery, but we can experience it.

Absolutely. After almost 74 years of experience, his life was still as great a mystery as ever. Including why the hell his back ached so much.

2-17-17: Waning gibbous moon setting in the morning sky. The wind whistles around, rattling windows and doors.

Returning from morning prayer, he fixed what, over the twenty years he’d come here on retreat, had become his standard retreat breakfast: granola and an English muffin slathered with peanut butter. He gazed out the window and listened to the wind. He thought of the Brothers, how they were aging, like everyone else he knew, and of the young interns here at the retreat house. If there were a word to describe them as a group, it was “intense”—the young man with the gangly, adolescent body and the 60-year-old cultivated English voice, who, when he crossed himself, looked like a sailboat tacking into the wind; the short, androgynous young person with a heavenly, boy’s-choir voice, who knelt on the hardwood floor during communion; the gypsy-looking lad, who wore a silver and black scarf in any number of ways, and who kissed the chalice instead of drinking from it.

My God, he thought, they could be my grandchildren.

Which reminded him of his daughter, dead now for twenty-eight years. He said good morning to her, and felt a hot iron poker stab his lower back.

He opened his book on the spirituality of aging.

2-17: Buffeted by a wind down the Merrimac River from Canada or Hudson Bay or points north, Jesus hangs on a pine tree, keeping watch over the snow. Open water. Ice hugs the shore.

After snow-shoeing across the field in front of the hermitage into the woods, he followed the riverbank up to a high point where there was a bench that looked upon a bronze statue of Jesus on the cross and the Merrimac River snaking its way north. He brushed snow from the bench, sat and adjusted one of the bindings on his old wooden snowshoes. Twice the size of the newer ones, they were awkward things to walk in, but his grandfather had given them to him almost 60 years earlier, and he wasn’t ready to give them up.

He thought of the last time he’d seen Grampy: in the hospital, coughing up phlegm, yet still smoking. His father had died the same way. When doctors asked him about his family history, he said that all the women lived into their 80’s and 90’s, but that the men had died in their 60’s from bad habits.

He thought a minute and realized he’d already outlived every man in his family but two.

Feeling the wind, he pulled his hood around his head, and practiced watching himself watch a cold sunlight splash across Jesus’ compassionate face.

2-18: A star or planet that appears twice the size and brightness of the others hangs over the river. After a sunset of blues and reds and pinks, bright clouds circle into the evening sky like northern lights.

That night at dinner, their music had been a CD of a violinist—well, more of a fiddler, actually—playing traditional hymns. As he listened to “What Wondrous Love is This?” he saw his daughter, probably around ten, and himself trekking the woods of eastern Maine. Then, walking down the road from the main house to the hermitage, staring up at a glorious night sky, he’d had a vision of his daughter welcoming him into Eternity.

When he opened the door to his hermitage, he suddenly saw the elephant on the retreat, the one he’d come here carrying (No wonder his back hurt!): his fear of dying. Not so much death itself, but the events leading up to death: diagnosis, struggle, pain, loss of control, saying good-bye to his wife and her children and grandchildren whom he loved so much.

Was this fear part of learning how to die, as the author of his book recommended, or was he needlessly obsessing over something he had no control? Should he work to follow the wisdom of the Shawnee prophet, Tecumseh, whose words he’d copied into his journal earlier that day: … when it comes your time to die, be not like those whose hearts are filled with fear…Sing your death song and die like a hero going home? Or should he simply ask, “God, give me the serenity to accept the things I cannot change…” and focus more on enjoying the time he had left?

2-19: A ‘V’ of geese flies across the field toward the Merrimac. Snow melts in the bright sun.

On this, the last morning of his retreat, he decided to skip morning prayer and spend a half-hour or so in front on an icon in the hermitage prayer corner of Mary and the baby Jesus. Eventually, he became aware that even as Mary held her child, her hands were already open, as if preparing for him to leave her. He watched the Christ child stroking his mother’s face, and recalled the last time his daughter had been conscious enough to recognize him: on her hospital bed, two days before she died, four catheters puncturing her body, one of which was filling her with what her doctor said was “more morphine than I’ve ever given anyone.” She’d groaned and he’d gone to her bedside. She opened her eyes, saw him, and stroked his face. “You need a shave,” she’d slurred, and then dropped into something between a coma and a drug-induced sleep.

He thought again of the need to let go, even of our children, even of our lives, and at the same time, of the presence of love that continues, that endures, that is stronger than death.

Later in the day, he packed his things, stripped and remade his bed, vacuumed the hermitage. His backache was almost gone. Taking his suitcase and backpack to the car, he watched the geese flying overheard and recalled a snatch of psalm:

For I am but a sojourner with you

a wayfarer, as all my forbears were.

Turn your gaze fro me, that I may be glad again

before I go my way and am no more.

He got in the car, inserted Leonard Cohen’s last album, the one he made while dying of cancer, and continued on his pilgrimage.