On what would be my daughter Laurie’s thirty-second birthday, I sit on a ledge by the shore of Columba’s Bay on the island of Iona, off the west coast of Scotland. Waves break on the rocks, ethereal light shimmers around me, and huge white clouds lie low over the water. Some fifteen hundred years ago, an Irish monk landed on this shore with twelve brothers and established the monastery in which Western Christianity was born. Long before Columba arrived, however, Iona was home to Druid and other pagan religions. Some books call this island a “thin place,” where the connection between God and humanity, the eternal and the temporal, is most apparent.

The stones on Iona have a lot to do with that feeling. On Columba’s Bay you are surrounded by stones: yellow, pink, violet, white, gray, and green, sometimes all marbled together in one rock. Some of these stones are almost three billion years old. Holding one of them is the closest I have ever come to imagining eternity.

Sheep bleat in the distance, and four teenagers giggle and scream as they wade in the chilly water. Up and down the rocky beach, more young people in shorts and backpacks—perhaps thirty altogether—pick up stones or sit on stones, walk on stones or throw stones into the bay. Earlier this morning, Laurie’s stepmother and I joined the weekly pilgrimage around Iona’s various holy sites led by staff of the Iona Community, an ecumenical Christian organization. This week is the Community’s annual Youth Conference, and instead of the meditative walk I imagined, Mary Lee and I have found ourselves on a gallop, the young people racing up and down hills and jumping over rocks like mountain goats, while we plod along behind, catching up at the various stations along the way, always arriving at the tag end of a prayer.

Since Laurie died fourteen years ago, only months after  being diagnosed with cancer, I am sometimes more aware of her continued presence in my life than at other times. On the pilgrimage around Iona, I see her in these young people, the way they bounce when they run, the intensity in their eyes when they talk, their uninhibited laughter.

As always, my pleasure in my daughter’s company is tempered by the loss of her physicality. Even if I can occasionally feel her touch, I cannot hold her. I cannot see her face become more interesting as it ages. Emptiness starts to burn, and I lift my eyes to the hills—to the sunlight shimmering over lichen-covered rocks.

Jennie, our student guide, calls us together. “As part of our pilgrimage,” she says, raising her voice above the sound of the wind and the waves, “we take two pebbles from the beach. One we throw into the sea as a symbol of something in our lives we would like to leave behind, while the other we take back with us as a sign of a new commitment in our heart.”

I watch the kids turn and race down over the rocks. I follow, not sure just what I want to leave behind, until I pick up a black and white and red stone, flat and jagged at one end. I feel once more the sharp-cornered ache that I will never—at least in this lifetime—have recompense for the loss of my child. At the water’s edge, I put my index finger around the stone, and dipping my shoulder, skim the rock across the water.

Jutting out into the ocean in front of me, a rocky promontory is layered like a birthday cake, yellow turning to black, then dove-gray, crowned with green-brown grass frosted with pink heather and yellow wild flowers. Splashes of yellow lichen pattern the gray rock. I’ve read that in order to attach firmly to the rocks, lichen manufacture solvents capable of dissolving stone, and it occurs to me that even the ancient stones of Iona dissolve, wash to the sea, and recycle back into rock or some other organic form.

That these stones can be both eternal and transitory is something I can’t fathom, but I decide it is the koan I should take back with me along with a green heart-shaped stone I’ve just picked up.

I put the green heart in my pocket, turn, and clamber up the fifty or so yards of stones rising at an almost forty-five degree angle between the water and a field. The stones shift, slide and sink under my feet. Once, I stumble and fall to my knees. Finally, I give up trying to walk straight up and begin to weave my way back and forth. When I reach the top of the final tier of stones, I turn again and look once more out over Columba’s Bay. I feel Laurie nudge me with her elbow, hear her voice in my ear: “Pretty neat day I painted you, huh, Dad?”

The surf crashes and the layers of stone shift in a chorus of clanks, thuds, clatters, pings, rattles, and taps, a Sanctus that pulls at me as Mary Lee and I trek through the boggy fields, over shimmering hills, past the cairn of Cul ri Eirinn, where Columba turned his back forever on Ireland, and across the Machair, where fairies are said to dance in the moonlight. 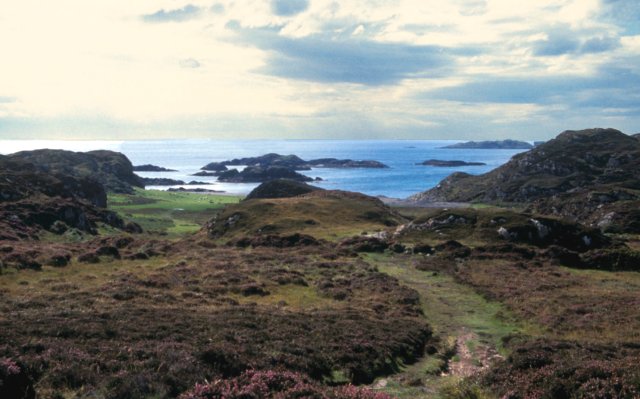