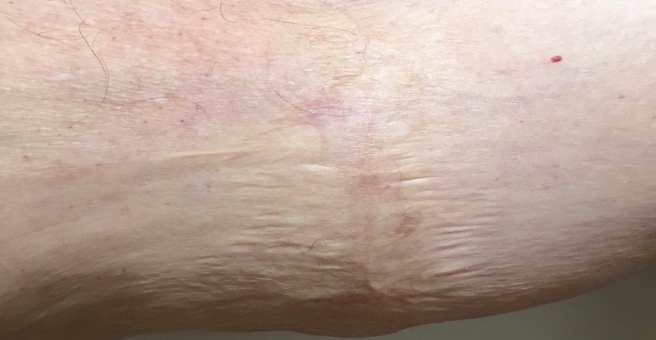 For fifty years, I’ve been facilitating writing groups of various kinds. Participants have ranged in age from fourteen to eighty. They’ve been students, white-collar professionals, blue-collar workers, unemployed, and homeless. Over that time, I’ve begged, borrowed, or stolen certain writing prompts that always seem to work, no matter who’s there. For example, when a group meets for the first time, and I want to avoid the standard introductions and at the same time establish an atmosphere of trust, I’ll have us (since I always write, too) write about our scars.

Almost everyone begins by at least mentioning physical scars. Men, especially, seem proud of them. The other night, I was watching a Netflix series called Longmire, in which Sheriff Longmire has been stabbed and his female deputy Vic is helping him bandage the wound.

“Come on. All men know how many scars they have.”

Perhaps it’s a sign of the times that women are becoming less reticent about their physical scars. Last October’s Cosmopolitan magazine ran a series of photographs of women proudly showing their mastectomy scars. Photographer Ami Barwell said in the press release, “These photographs show that, despite what they’ve been through, these women are empowered. They are strong, happy, and sexy.”

Scars are part of growing up, and in many cultures children are intentionally scarred when they reach puberty as part of sacred rituals to celebrate their becoming adults. Richard Rohr, whom I often reference in my blogs, wonders if the popularity of tattoos and body piercings these days isn’t a secular substitute for what young men and women once gained through circumcision, scarification, shaving of heads, and knocking out of teeth.

Our scars tell a story of our lives. My most unusual scar is the one on the inside of my right elbow that looks like a burn. I like to show it to people to see if they can guess what caused it. Most can’t, because the scar tells not only of my past but also of an era long ago and far away. When I was four years old, I was in the cellar with my mother one day while she was doing the weekly laundry in our wringer washing machine. Fascinated by the rotation of the rollers, I stuck my hand up to touch them. The next thing I knew, I was screaming as the wringers went round and round on my arm— the first of what we in my twelve-step program call our “goddamned learning experiences.”

As I moved into something resembling adulthood, I scarred the back of my head when I fell down some school steps onto a broken bottle. I garnered several knife scars from working in a market garden cutting lettuce, spinach, and beet greens, and a black scar when my friend Jerry and I were sword fighting with pencils in a high school chemistry class. (The lead is still in my hand.) Recent X-rays of my scarred lungs remind me of the years in college I worked fighting forest fires, inhaling wood smoke for hours until I could take a break, get away from the smoke, and light up a cigarette.

As an adult, I have a two-inch scar on my back from a fusion of L-2 and L-3 vertebrae, which kept me out of Viet Nam. I have two hernia scars (I’ll spare you a photograph), and two longer scars from bi-lateral hip replacement that I’ve always thought of as resulting from the time after my daughter died, when, like Jacob, in the Old Testament, I wrestled with angels.

But if we’re proud of our physical scars, we tend, I think, to hide our emotional ones. I’ve spent seventy years hiding the scars of shame, rejection, and fears of confrontation and failure caused by growing up in an alcoholic family. And the death of my eighteen-year-old daughter Laurie has left a scar that feels more like an amputation, one that, even after thirty years, gets ripped open every time I visit someone in the hospital or read in the newspaper about the death of a young person. (That scar has been ripped open a lot lately.)

For some reason, our physical scars, which almost always are signs that we’ve failed at something, make us proud, while our emotional scars, which often aren’t the result of anything we’ve done, but have had done to us, make us ashamed. Maybe it’s because our physical scars say: “I can take it. I’m not a victim. I’ve survived,” while our emotional scars say, “I should be stronger, more in control.” When Laurie died, I felt weak and powerless. I did not go to her funeral. I refused to run her obituary in the local newspaper. I had recurring dreams about old high school basketball teammates making fun of me for being uncoordinated and slow. In other words, I was ashamed of myself, not because of anything specific that I’d done or not done, but because of who I thought I was: a loser.

As I reach the seventy-sixth year of my earthly pilgrimage, one of my goals is to become as proud of my emotional scars as I am of my physical ones. This Easter has helped. As a practicing Christian, I believe in resurrection. But this year, I realized that even the risen Christ carried the scars of his death. In fact, in one of the most famous of these stories, his disciple Thomas will not believe that Jesus is risen until, as Thomas says, “I see the mark of the nails in his hand, and put my finger in the mark of nails and my hand in his side…” Only when Thomas is able to do so does he cry, “My Lord and my God!”

It’s Jesus’s scars that show his disciples who he is; I need to realize it’s my scars—physical and emotional—that reveal not only who I am, but also the ways in which I’ve become resurrected.

Or, as Bill, living in the local homeless shelter after losing his construction career because he’d broken his back and become addicted to pain killers, but who, nonetheless, was trying to put his life back together by taking on on-line course in computers, wrote for one of my writing groups,

“Scars are the ledger of life. The reminders of when we lacked experience. Wounds are due to ignorance and inattention, apathy, and sometimes poor coincidence. Some we hide from others, some from ourselves. Some are shared with only a few. Some we display proudly. You would think scars are grievous things. In truth they are wondrous. Scars are badges of life’s ills and trepidations…healed.”